This work is concerned with the successful attempts we have made to fabricate nanostructured
spheres composed of mixed metal oxides. ZnO/TiO2 nanocomposites supported on an FTO substrate are used as the photoanode electrode for quasi-solid-state dye-sensitized solar cells (QS-DSSCs). The phase purity of the ZnO and TiO2 phases of the composite shell has been studied by X-ray diffraction peak analysis. A novel gel polymer electrolyte based on a poly(acrylamide)–poly(ethylene glycol) composite and a binary organic solvent was prepared. The polymer gel electrolyte based on the composite of poly(acrylamide)–poly(ethylene glycol), the binary organic solvent of ethylene carbonate and propylene carbonate and the additive of 4-tert-butylpyridine has been employed to fabricate a quasi-solid-state dye-sensitized solar cell. The conversion efficiency of the dye-sensitized solar cells with nanocomposites is 6.5% which is more than double compared with that of bare ZnO nanoparticle photoanodes (3.8%). We believe that this improvement comes from the synergetic effect between ZnO and TiO2, which increases dye absorption, electron transport and electron lifetime, as discussed with the
EIS and loaded absorption results. From the current–voltage and incident photon-to-current conversion efficiency (IPCE) measurement, the conductivity of the nanocomposite ZnO–TiO2 was shown to be higher compared to the nanostructured ZnO itself. This simple method can be universally adopted for all quasi-solid-state electrolyte-based DSSCs in order to improve their performance and durability. 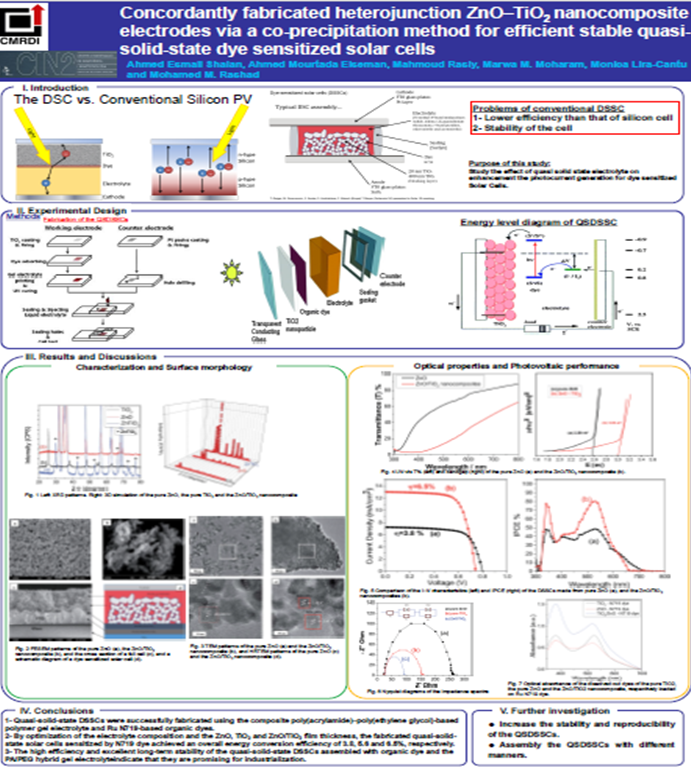