Novel Strategies for Fine-Tuning the Nano-Architecture, Vibrational Characteristics, and Functionality Enhancement of Low-Dimensional Carbon Nano-Systems at the Ion-Assisted Pulse-Plasma Growing

Over the past few decades, carbon-based nanomaterials and, specifically, low-dimensional nanocarbon allotropes have revolutionized the field of materials science. The properties of carbon-based nanomaterials depend on their 3D nano-architecture. Dif-ferently hybridized carbon atoms are capable of forming graphite, diamond, graphene, carbyne chains, and many other specific allotropes. Each carbon allotrope has notably different structural, mechanical, and electronic properties.
Low-dimensional nanocarbon allotropes represent promising nanoscale building blocks for both the nano-hybrid systems and for macroscopic assembly of emerging multifunc-tional composites, as they possess a unique nano-architecture, a set of chemical and physical properties, and abundant functionalities that are of great interest for high-end applications in the emerging fields of nanoscience and nanotechnology.
The "holy grail” of low-dimensional carbon allotropes, carbyne, represents a one-dimensional chain of carbon atoms that is highly reactive, making it very tricky to synthesize.
Carbyne-enriched nanomaterials have continued to attract much interest due to advanced mechanical and physicochemical properties, including a flexible dimensional structure, an extremely large surface area in relation to mass, and mechanical strength that has been predicted to be an order of magnitude higher than that of diamond.
The objective of this study is to predictive unlocking the functional properties of the low-dimensional nanocarbon allotropes at the ion-assisted pulse-plasma deposition through manipulating by combinations of unique nano-architecture, physics-chemical properties at the nano-scale by deep materials informatics-based tool-kit.
The growth of the macroscopic crystals of carbyne is inhibited by the instability and high reactivity of this allotropic form of carbon. Relatively recently, were found new route to compensate for the above disadvantage by encapsulating oriented linear chains of carbon atoms - the monatomic carbon filaments into the matrix of amorphous carbon, creating bends and controlling the end groups in the process of ion-plasma growth. Such modifi-cation of carbon nanomaterials was named as an 2D-ordered linear-chain carbon, that represents a two-dimensionally packed hexagonal array of carbon chains held by the Van der Waals forces with the interchain spacing approximately being between (4.8–5.03) angstroms.
Application of the 2D-ordered linear-chain carbon opens possibilities for enhancing the functional properties of a number of nanomaterials and to unlock their full potential for practical applications in advanced nanotechnologies and high-end devices.
Nowadays, research on materials science is rapidly entering a data-driven age. Advanced approaches for the predictive design of nanocarbon-based multifunctional composites with unique properties are connected to deep materials informatics. In recent years, data science techniques have been applied to nanomaterials research and have demonstrated significant achievements due to their outstanding capability to effectively extract the sig-nificant data‑driven linkages from various input nanomaterials to create representative data of their output properties.
We propose the data-driven carbon nanomaterials genome approach that can serve as an effective stimulator for the creation of multifunctional carbon-based nanomaterials with a set of new unique properties and the discovery of new areas for the implementation of grown multifunctional nanomaterials in various areas of practical use, researches as well as for intensification of the development of promising high-tech devices.
This data-driven approach is referred to as the fourth paradigm of science. The applica-tion of the data-driven approach opens up unprecedented possibilities for the predictive programming of the 3D nano-architecture of the low-dimensional nanocarbon allo-tropes-based nanostructured metamaterials at a fundamentally new level.
We propose the innovative concept of fine tuning the vibrational characteristics, heteroa-tom-doping, functionality and nano-architecture of 2D-ordered linear-chain carbon-based nano-matrixes by using precision surface acoustic waves (SAW)-assisted micro/nano ma-nipulation by the pulse-plasma growth zone, combined with the data-driven carbon na-nomaterials genome approach.
Application of the surface acoustic wave-based tool-kit opens possibilities for accurately manipulating the breaking and formation of bonds during the ion-assisted pulse-plasma growth and, accordingly, the transformations of various phases in the nano-matrix growth zone.
Our research demonstrates how vibrations, frequency and energy flux can change and program the nano-structure of the growing carbine-enriched nanostructured metamateri-als.
Manipulating by the self-organized patterns excitation we can provide controllable growth and programming of the properties of the functionalized carbyne-enriched nanostructured metamaterials.
Fundamental improvement of the ion-assisted pulse-plasma deposition technology for increased stability of the growed carbyne-enriched nano-matrices is connected with ap-plication of the controllable vibrational-acoustic and electro-magnetic activation of the plasma deposition region.
Acoustic and electromagnetic holograms with specified frequency and spatial character-istics are capable of providing spatial marking of the structure of grown 2D-ordered line-ar-chain carbon-based functionalized nano-matrix.
Improving the technological capabilities of growing and precision programming of the properties of the low-dimensional nano-carbon allotropes allows creation of new versions of the multifunctional hybrid nanomaterials with a set of new unique properties and, thereby, reveal fundamentally new opportunities for practical use of these nanomaterials.
The combined use of the surface acoustic wave tool-kit, heteroatom doping, and the da-ta-driven carbon nanomaterials genome approach at the during the synthesis of function-alized nanocarbon-based multifunctional composites create a synergy effect that makes it possible to multiply the efficiency of the approaches used. 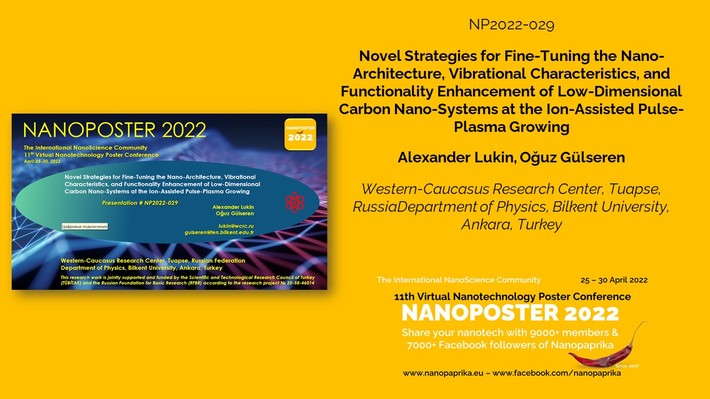