A simple and facile synthesis of enoki mushroom mediated sulfur nanoparticles (SNP) and its use as active packaging film is reported here. The enoki mushroom extract capped SNP was prepared by acid hydrolysis technique, and the developed SNP was ~20 nm in size and roughly spherical shape. The successful capping of mushroom extract in SNP was confirmed by XPS and FTIR spectra. The fabricated SNP was added to develop the gelatin/cellulose nanofiber (CNF)-based binary functional nanocomposite film. The addition of nanofillers has significantly enhanced the physical properties of the film, such as mechanical and UV protection properties. The integration of the nanofillers did not much alter the film's hydrophobicity, water vapor barrier, and thermal properties. Besides, the nanocomposite film showed good antibacterial activity against food-borne pathogenic bacteria, E. coli, and L. monocytogenes. The novel gelatin/CNF-based binary functional nanocomposite film has high potential in active packaging applications. 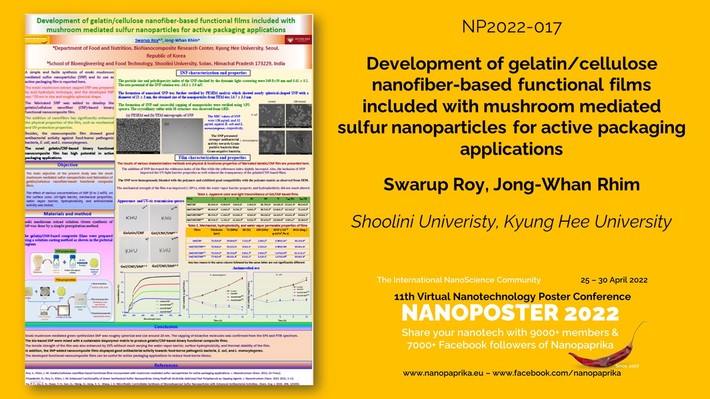