Because of the essence of p-type doping, highly opaque materials, and deep-lying valence bands, metal oxide has been extensively studied as a hole transport layer in perovskite solar cells (PSCs). In this research, a new phase based on trivalent Ni2O3 is synthesized by processing mixed nickel (acetate/nitrate) in a low temperature solution. In contrast, high-temperature solution processing of divalent NiOx yielded novel Ni2O3 thin films with increased quality and energy compatibility over perovskite thin films. In this regard, high-performance perovskite solar cells with a power conversion efficiency (PCE) of 17.89 percent and negligible hysteresis comparable to 14.37 percent for NiOx are efficiently generated using MA0.85FA0.15PbI0.9Cl0.1 perovskite. When compared to divalent NiOx-based PSCs, Ni2O3-based PSCs had the largest fill factor (FF) (82.66%). (67.53 percent ). Various characterization tests and evaluations show that the film quality has improved, charge transport and extraction has increased, and charge recombination has been reduced. In contrast to sol–gel-processed NiOx, the system has a low hysteresis. 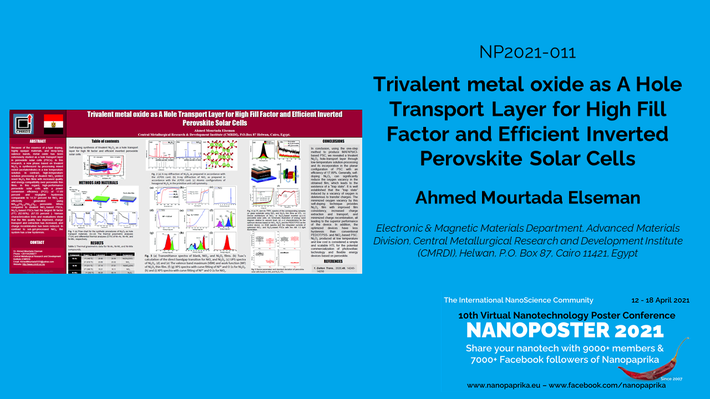