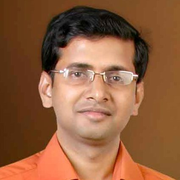 Dr. Vivek Polshettiwar is Reader in the Division of Chemical Sciences at TIFR Mumbai. Before joining TIFR, he obtained his Ph.D. (2005) under the supervision of Prof. M. P. Kaushik from Jiwaji University and DRDO, Gwalior. He then investigated nano-structured silica-catalysts, with Prof. J. J. E. Moreau in 2006 during his postdoctoral research at École Nationale Supérieure de Chimie de Montpellier (ENSCM), France. He then moved to United State Environmental Protection Agency (US EPA) (2007-2009) as ORISE research associate to research nano-catalysis for green chemistry with Prof. R. S. Varma. Then, he started his independent group of nanocatalysis at KAUST (2009-2013). During this period, he also worked as visiting scientist at CPE, Lyon, France with Dr. Jean Thivolle. He has published nearly 75 articles with h-index 30 and more than 2400 citations; in high-impact journals such as Angewandte Chemie, ACS Nano, RSC Chemical Science, ChemComm, Chemistry-A European Journal, ACS Catalysis, ChemSusChem, Journal of Organic Chemistry, Green Chemistry etc, including reviews in journals such as Chemical Reviews, ACS Accounts and Chemical Society Reviews, book chapters, patents (US, PCT, GCC). He has also edited one book from the RSC green chemistry series and another one for Wiley on nanocatalysis. Several of his articles are rated as Top-10, Top-5, Hot article and appeared on journal’s front covers. He is recipient of prestigious Oak Ridge Institute for Science and Education (ORISE) Research Fellowship (2007) at US-EPA and the eminent Scientific and Technology Achievement Award by US Environmental Protection Agency, Special Mention (2009). He has also been awarded other esteemed fellowships like Humboldt, Marie Curie in 2009 (not accepted due to prior commitment to KAUST) and French government fellowship in 2005. He was also awarded as Top-25 cited author in 2011 by Tetrahedron and Young Scientist Award at DSL-2012. Recently, he is also nominated as Asian Rising Stars-Invited Speaker at 15th ACC Congress by Federation of Asian Chemical Society.

Dr. Polshettiwar's research interests are in the area of of advanced nano-materials, nanocatalysis and green chemistry. He believes that next generation catalysts can be developed by shape and morphological control of nano-materials which will allow preferential exposure of active site. His nano-catalysis group is working in the area of nano-materials (metals, metal oxides, silica, titania, MOFs) synthesis with controlled shape and morphology and their application as nano-catalysts (CH activation, metathesis, hydrogenolysis, organocatalysis, etc) and environmental applications (e.g. CO2 capture, water purification etc) that allow for more sustainable and green production processes. Polshettiwar's final goal is to push the boundaries of catalysis research by using this technique to develop nanocatalysts based on non-precious metals.