Abstract: Understanding protein-material interaction is vital for development of biosensors and biomaterials. Human serum albumin (HSA) is an all important protein most prevalent in blood plasma and thus it also most frequently comes into contact with biomaterial surface. Its adhesive properties are well researched, also at the single molecule level with atomic force microscopy (AFM) (Dupont-Gillain et al., 2003; Lai et al., 2008). The transforming growth factor-β (TGF-β) is an extremely stable protein (Sikora and Cieplak, 2012) and an important regulator with diverse biological effects on cellular processes including proliferation, migration, differentiation and apoptosis (Runyan et al., 2006). It is involved in multiple pathologies, including cancer and fibrotic diseases, like Marfan syndrome. In this disease TGF-β fails to be bound by fibrinogen, which causes weakening of connective tissues. Unbound TGF-β thus circulates in significant quantities in extracellular space, entering bloodstream.
In those conditions both HSA and TGF-β can appear adhering to biomaterial/biosensor surfaces. TGF-β bears some similarities to HSA (Siddiqui et al., 2004) and HSA is known to influence surface binding of other proteins (McClary et al., 2000). Thus adhesive properties of those proteins could be influenced by mutual interaction. In this study we employ sensitive atomic force microscopy (AFM) based force spectroscopy technique to evaluate if such interaction can influence measurements of surface adhesion force. We observed that if 2% addition of TGF-β1 was present in HSA covered surfaces then adhesive forces were limited to 600pN, with overall adhesive properties remaining similar. 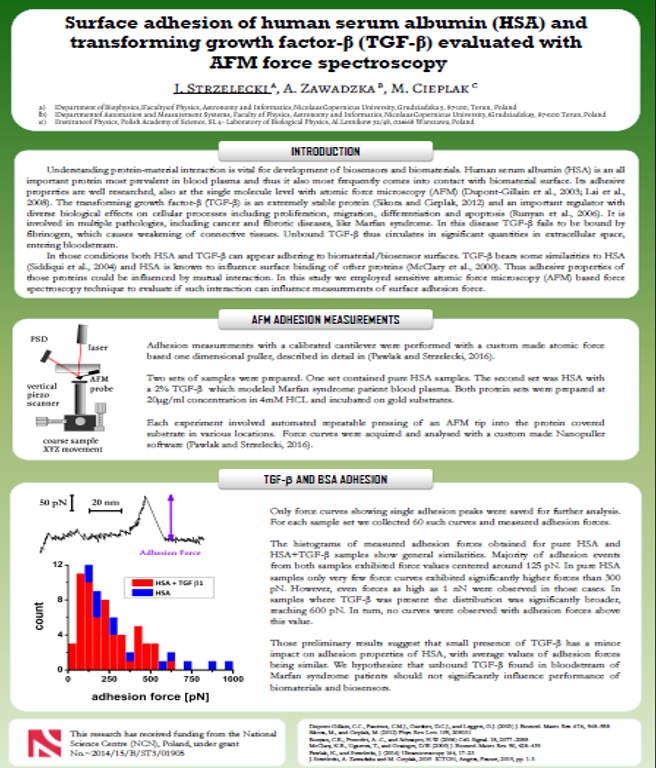