Enhancement of Optical Absorption, Photoluminescence, and Raman Transitions in biosynthesized nanostructures of β-Bi2O3 loaded with Ag

Abstract: Environmental treatment with bismuth-based catalysts is a promising process due to its band structure and abundance. However, these semiconductors exhibit limited photocatalytic activity due to a high rate of charge recombination. The catalytic activity was found to be more enhanced when noble metals, such as Au, Ag, and Cu nanoparticles (NPs), were loaded on the semiconductors because the metal NPs can store electrons making the e−/h+ charge separation. In this work, it was loaded Ag onto β-Bi2O3 nanostructures by using the aqueous extract of Juglans regia as synthesis media by the impregnation method. The crystalline structure was studied by Raman spectroscopy, the peaks at 120, 308 and 467 cm-1 can be attributed to the β-Bi2O3 (tetragonal) phase. A significant increase in Raman signals was observed when Ag is added due to the enhanced local electromagnetic field so-called surface-enhanced Raman scattering (SERS) effect. Photoluminescence (PL) spectra showed a strong broad emission peak at 460 nm whose intensity decreases as the amount of Ag added increases, demonstrating an effective inhibition of the recombination of charges. To elucidate the elemental and the chemical state of Bi and Ag, the samples were analyzed by X-ray Photoelectron Spectroscopy (XPS), the peaks of Ag 3d5/2 and Ag 3d3/2 centered at 368.0 and 374.0 eV respectively, indicate that the state of Ag is metallic. The enhancement optical response of the samples with AgNPs is attributed to localized surface plasmon resonance (SPR). This work provides new knowledge on the manufacture of photocatalysts from green synthesis, the results illustrate the great potential to be used in environmental remediation problems. 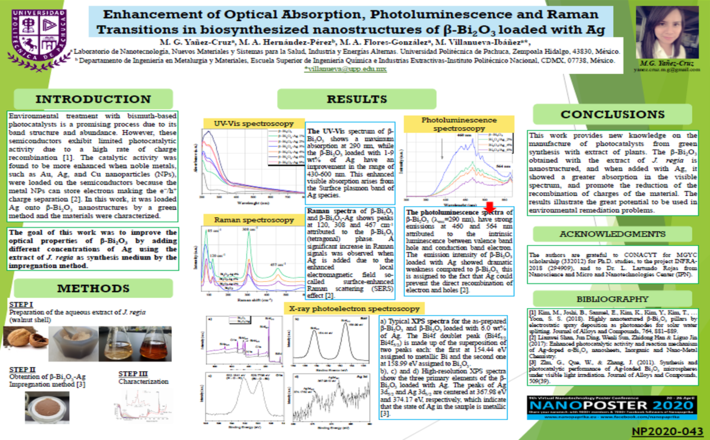