Abstract: Background: Acne vulgaris is a skin condition which affects the self esteem of a person. According to GBD (Global burden of disease) study, about 85% of the populations are being affected. Various medications are available for the treatment but, its uses are limited due to the side effect like skin irritation. In our study, we have formulated a novel combination nanoemulsion gel containing adapalene and resveratrol for the treatment of pustules assuming that it won’t produce much skin irritation and also expecting a synergistic activity.
Methodology: Spontaneous emulsification method was employed for the preparation of nanoemulsion and it was incorporated into gel. Further, various evaluation tests including in-vitro and in-vivo studies were performed.
Results: Cumulative percentage drug release was more for marketed formulation as compared to prepared formulation whereas, the prepared formulation had a better efficacy as compared to marketed formulation. Additionally, as an outcome of skin irritation study, the formulation did not produce any skin irritation. As an overall outcome, it can be said that the polyphenol used in the formulation has exhibited its synergistic activity.
Conclusion: The prepared formulation had more efficacy than the marketed formulation. Thus, we can say that the formulation has exhibited its synergistic activity on combining with a polyphenol. Hence, we can conclude that the novel formulation containing adapalene and resveratrol served as a better candidate for the management of acne (pustules). 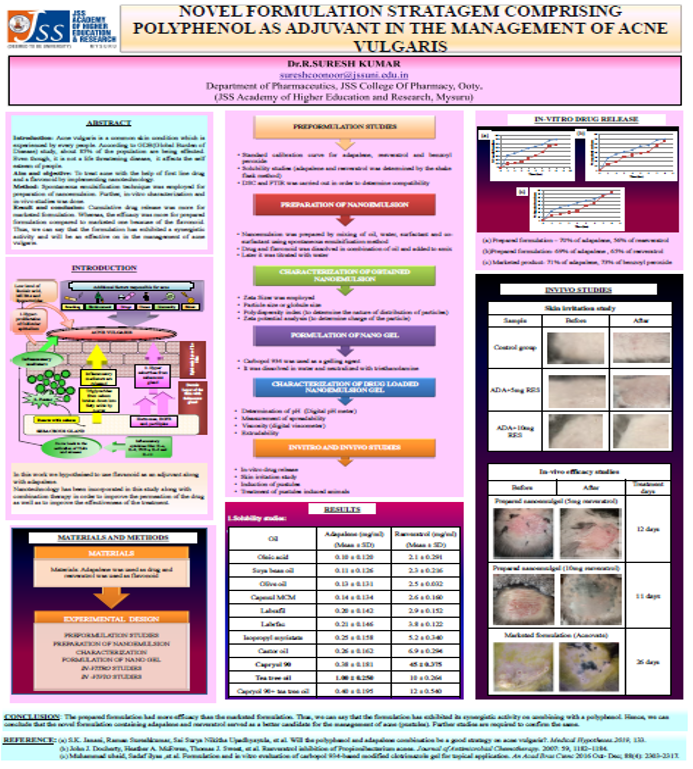