The TMDCs such as MoS2 and WSe2 have been extensively studied with an ever-growing interest due to their superior transport properties for ultimate device scaling for the past few decades [1,2]. They show unique carrier transport properties through the interface and defect engineering of TMDCs by tuning the S/Se compositional ratio, the number of stack layer, chemical doping, and work function of metal contact. The impact of PEDOT:PSS in WS2-xSex/n-Si heterojunction solar cells and the junction property at the PEDOT:PSS/WS2-xSex interface is explored in this study. we present the carrier transport property of PEDOT: PSS coated (2D) transition metal dichalcogenides (TMDCs) WS2-xSex/n-Si p-n junctions formed in the dark and under light exposure using field-effect transistors (FETs) structure. WS2-xSex thin films (~4 nm thickness) were spin coated using ammonium tetrathiotungstate (NH4)2WS4 and a mixture of N-methyl-2-pyrrolidone (NMP) (55 wt%), Methylamine (30 wt%) and 2-aminoethanol (15 wt%). The precursor solution (stirred ~20 hr.) was spin coated at 6000 rpm on the n-Si and th-SiO2(285 nm)/P+-Si substrates and annealed on a hot-plate at 140 °C for 2 min. Thereafter, the selenium vapor exposure was executed at 600 °C for 50 minutes using H2(5%)/Ar (50 sccm) mixture gas followed by the sputtered Pt source and drain (S/D) electrodes. Finally, PEDOT: PSS (w/o ethylene glycol) was coated by drop cast near the S/D electrodes regions on the top of WS2-xSex p-channel FETs. In the transfer characteristics of WS2-xSex p-channel MOSFETs with and without PEDOT: PSS cap layer near one side and both sides at the S/D electrodes, the Isd was increased by 1.6 times for PEDOT:PSS coated FETs near both S/D electrodes. The similar behavior was also observed for WOx/WS2-xSex p-channel MOSFETs. These results originate from the enhanced hole injection ability from Pt S/D electrodes to WS2-xSex layer through PEDOT: PSS layer. 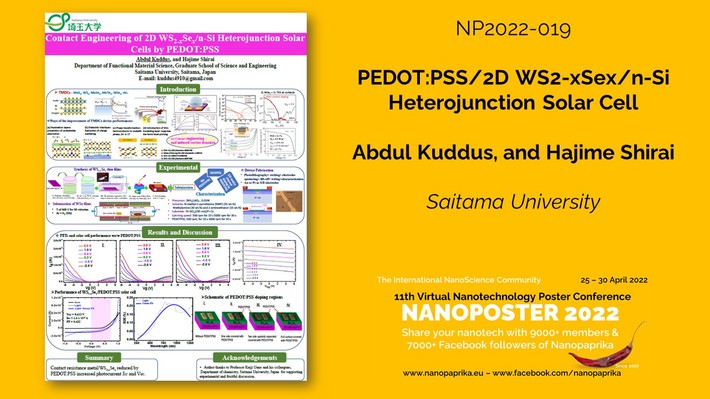