Photoelectrochemical (PEC) water splitting has one of the sophisticated approaches by exploiting the renewable energy sources of solar energy converted into chemical fuels with utilizing the semiconductor as a photocatalyst. Recently, ABO3 (A = M2+, B = Ti, Sn, Nb) perovskite semiconductors have been concentrated towards photocatalysis due to its wide band gap, visible light active and band structures. Among the ABO3 materials, tin based perovskites have been exclusively investigated due to their octahedral structure and oxidation states of tin could accelerates the photcatalytic activities. The cobalt stannate-graphitic carbon nitride (CoSnO3/g-C3N4) nanohybrids photocatalysts are investigated in photoelectrochemical (PEC) water splitting with high stability of 7500 s. The acquired photocurrent density of 20% CoSnO3/g-C3N4 has 6-fold greater than g-C3N4 and the attained applied bias photo-conversion efficiency (ABPE) of 2.0*10-3 which is 2-fold larger than CoSnO3. The CoSnO3/g-C3N4 photoelectrode material increase the visible light absorption, accelerates the charge carrier density of 12.69*1023 cm-3 and charge transfer resistance reduced upto 16.71 kΩ which indicates the improved PEC activity through the formation of Type-II heterojunction between CoSnO3 and g-C3N4. 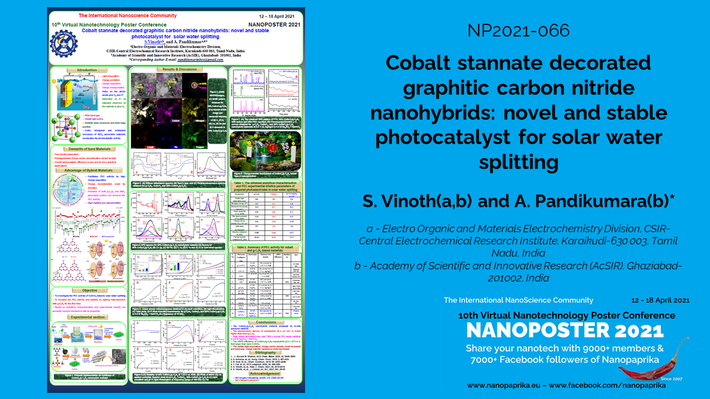