Development of EFV nanocrystals to increase its biopharmaceutical properties

Efavirenz (EFV) is an antiretroviral, non-nucleoside reverse transcriptase inhibitor and second choice for HIV treatment in Brazil. This drug can be classified as class II according to the Biopharmaceutics Classification System, so it has low aqueous solubility and high membrane permeability. Because of that, oral EFV formulations are challenging, presenting dissolution as limiting stage and consequently low bioavailability. Therefore, the main goal of this work is to produce EFV nanocrystals using top-down technique to increase the dissolution rate. For that, a formulation using EFV (10%m/v); Sodium Lauryl Sulfate (SLS) (0,2%m/v); e Hydroxypropyl Methylcellulose (HPMC) (0,4% m/v) were processed using milling beads. Two samples were produced: A1 fully processed with 500 μm milling beads by 180 minutes and A2 processed for 110 minutes with 500 μm milling beads and then with 200 μm milling beads for the remaining time until 180 minutes. During the process, sample sizes were measured. Aftward, samples were dried by spray-drying methods and were characterized by MEV, TGA, DSC and in vitro dissolution.
A2 wet sample showed low polydispersity and d90 parameter similar to A1. While for the dry samples, A1 showed parameter d90 smaller than A2 and similar polydispersity. It was observed that A1 wet sample exhibits growing sized particle tendency after 110 minutes different from A2 sample.TGA results show higher thermal stability in A1 and A2 in comparison with IFA. Regarding DSC, a slight decrease in the samples melting point due to the addition of excipients was observed. In MEV analysis, it was observed that in the A2 sample the particles agglomerate forming one big particle containing a smaller one inside it. A1 sample particles were spherical and some of them presented a roll in the middle. A1 sample showed an increase in the dissolution efficiency when compared to EFV without processment and A2 sample. This indicates that A1 samples can possibly increase EFV bioavailability in vivo. Thereby, sample A1 indicates favorable results in size and dissolution rate analysis. 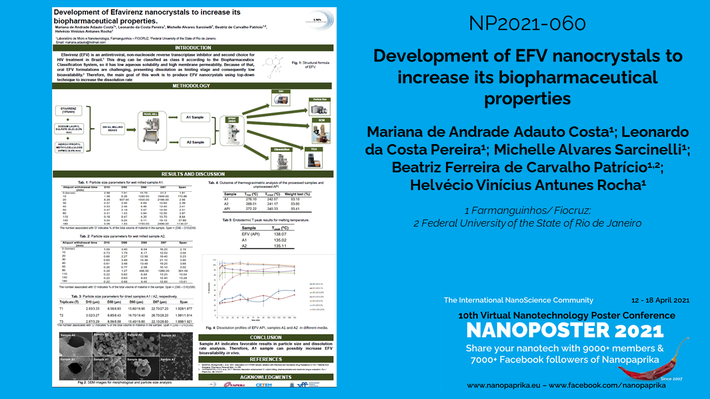