DEVELOPMENT AND CHARACTERIZATION OF SELF-EMULSIFYING SYSTEMS CONTAINING AMPHOTERICIN B

Amphotericin B (AmB) is a drug used for the treatment of severe fungal infections and leishmaniasis. Currently, its administration is limited to the intravenous route that can cause irreversible nephrotoxicity. The development of an oral formulation of AmB could prevent this clinical outcome. Among the nanocarriers capable of making this process feasible, the self-emulsifying drug delivery systems (SEDDS) stand out. These systems, composed of a mixture of drug, oil, surfactant, and co-surfactant, can disperse spontaneously in an aqueous environment under gentle agitation (such as peristalsis) and form nanodroplets that may potentially increase the intestinal permeability of the drug. Thus, the objective of this work was to develop SEDDS formulation containing AmB. For that, the solubility of AmB was initially evaluated in 46 excipients, which comprised the independent variables in a design of experiments with mixtures (DOE) and evaluated for droplet size (DS), polydispersity index (PdI), the AmB solubility ([AmB]) and transmittance (T%). The best solubility results demonstrated the following pattern: Phosal® 50 PG > Super Refined® PEG 300 > Imwitor® 308 > Transcutol® HP. The developed model revealed a technological dilemma, since Transcutol® HP proved to be important in reducing DS and PdI, and responsible for a significant reduction in [AmB]. Hence, to maintain high [AmB] and reduce DS and PdI, the parameters were settled to maximum [AmB], and the effect of different surfactants was evaluated, in which Span® 80 was selected. The final formulation displayed [AmB] of 1.9 mg/mL, DS of 320 nm, and PdI of 0.3. Based on these results, it is possible to infer that the final formulation has promising properties as an oral nanocarrier for AmB, being selected for further evaluation of efficacy and safety in vitro and in vivo. 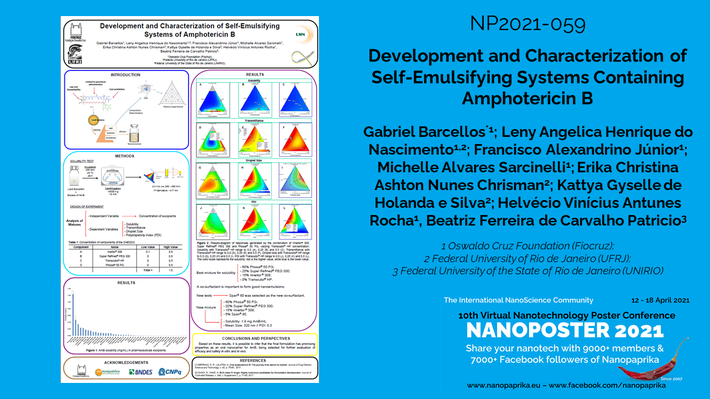