Nowadays, applications of nanomaterials are found in a number of commercial products like electronic devices, medical equipment, textiles, fluid additives, cosmetics, plastics and more. Nanomaterials are categorized as those materials which have structured components with at least one dimension less than 100 nm. Nanomaterial properties significantly differ from one another due to increased relative surface area and quantum effects. These factors can change the given material’s properties such as reactivity, strength and electrical characteristics. Small particle has greater surface area. A material made up of nanoparticles with smaller grain size is much more reactive than the same mass of a material made up of large particles of the same compound. As the particle size is reduced to a nanoscale surface area and quantum effects begin to dominate optical, electrical and magnetic properties of materials. As particle size reduces reduce to a nano level electrical, magnetic and mechanical behavior of the material is affected. In general, understanding surface and interface is a key challenge for researchers that are engaged in this area of specialty. The current trend for smart, self-sustainable, and multifunctional technology demands for the development of energy harvesters based on widely available and environmentally friendly materials. In this context, ZnSnO3 nanostructures show promising potential because of their high polarization, which can be explored in piezoelectric devices. Nevertheless, a pure phase of ZnSnO3 is hard to achieve because of its meta-stability, and obtaining it in the form of nanowires is even more challenging. Although some groups have already reported the mixing of ZnSnO3 nanostructures with Polyaniline (PANI) to produce a nano-generator, the resultant polymeric film is usually flat and does not take advantage of an enhanced piezoelectric contribution achieved through its micro-structuration. Herein, a micro-structured composite of nanowires synthesized by a seed-layer free hydrothermal route mixed with PMMA (ZnSnO3@PANI) is proposed to produce nano-generators. 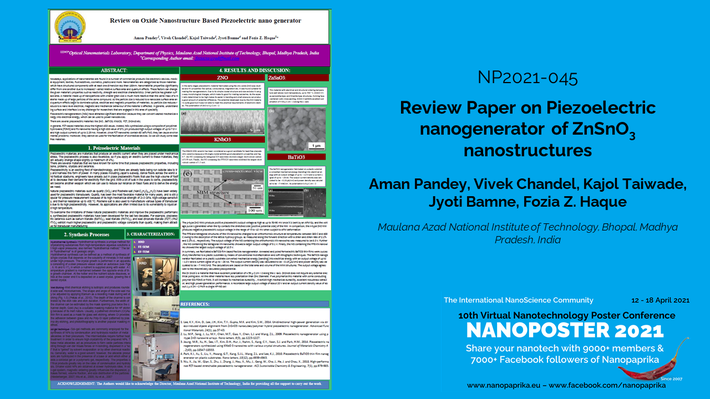