Materials at the nanoscale have been pursued over the last years due to their possible new behaviors and consequential new applications. From this perspective, ceramic materials are quoted to be used in various fields, from health to new sustainable ways to produce and store energy or even improve devices, like energy generators and magnets. However, it is quite hard to produce complex ceramics (with three or more elements) at the nanoscale. Oxide superconductors are part of this set of complex ceramic materials and, so far, has not been explored in depth. Since 2016, some works were published concerning the production of non-woven YBCO samples through use of a kind of one-pot synthesis route coupled with the solution blow spinning (SBS) technique. Such a technique was first described in 2009 and has been massively applied in research with polymers. SBS consists of the controlled injection of a polymer solution stretched by compressed gas. Parameters such as gas pressure, solution injection rate, volatility, viscosity, and temperature, are important for producing continuous and smooth wires with nano and submicrometric average diameters. However, when SBS is used to produce ceramic samples, the heat treatments take an important role. By use of this approach, YBCO has been successfully produced, presenting average diameters ranging from about 250 nm to 1000 nm. Recently it has been shown that the grains grow following the main axis of a nanowire in an Ostwald ripening-like process, and the high-porous nature of the samples is responsible for the appearance of a Paramagnetic Meissner Effect for applied magnetic fields on the microTesla range. On the other hand, the fragile ceramic nature is also evidenced in those samples. To solve this problem, a modification in the precursor solution synthesis was done to chemically introduce silver in the YBCO ceramics. This study demonstrated that the introduction of silver shifts the main XRD peak to the angular position 2t=32.8º, which indicates a better oxygenation process of the YBCO. Additionally, the crystallization and partial melting temperatures decrease by about 40 ºC. Consequently, by applying the same heat treatment used for YBCO samples without silver, a considerable shrinkage occurs. As a consequence, the samples lose their fibrous morphology, becoming dense porous-like ceramic. We expect that the future developments in producing YBCO+Ag could result in applications of such materials as, for example, in magnetic field shields, permanent magnets and easy-cooling bulk samples. Furthermore, one can benefit from the additional characteristic of the SBS technique that allows samples to be produced on tailored, custom-chosen shapes, since the material can be sprayed on top of a precast substrate. 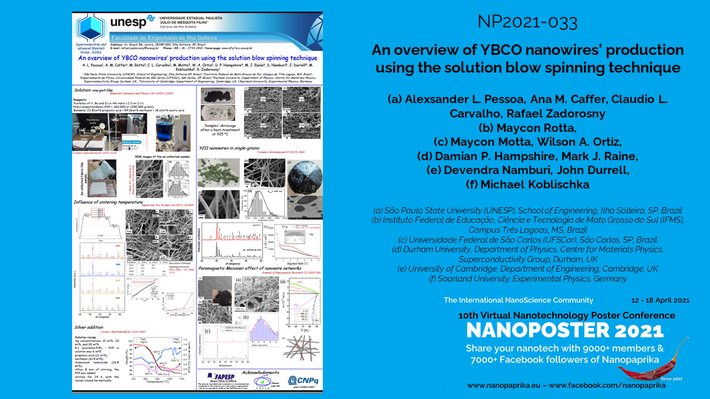