A series of CeO2 supported Cu, Co, and Ni nanocatalysts have been synthesized by the wet-impregnation method for CO2 thermo-catalytic hydrogenation from 200 – 400 °C in the fixed bed reactor. All catalysts were characterized by PXRD, N2-isotherms, and H2 temperature-programmed reduction. PXRD results have suggested that the incorporated Cu, Co, and Ni have uniformly distributed on the CeO2 surface, N2-isotherm analysis confirmed that the pores of CeO2 were blocked by incorporated metals and H2-TPR indicated strong interaction between active metal and CeO2. The CO2 consumption rate and product selectivity depend on the type of active metal on CeO2 and reaction temperature. The order of CO2 consumption rate for 5wt% Cu, Co, and Ni on CeO2 was 5Ni/CeO2 > 5Co/CeO2 > 5Cu/CeO2 at 400 °C. The high CO2 consumption rate for 5Ni/CeO2 was attributed to the presence of more active metallic Ni during the reaction which dissociated H2 molecule to H-atoms. The formed H-atoms reacted with active CO2 molecule and formed CH4 with 100% selectivity. 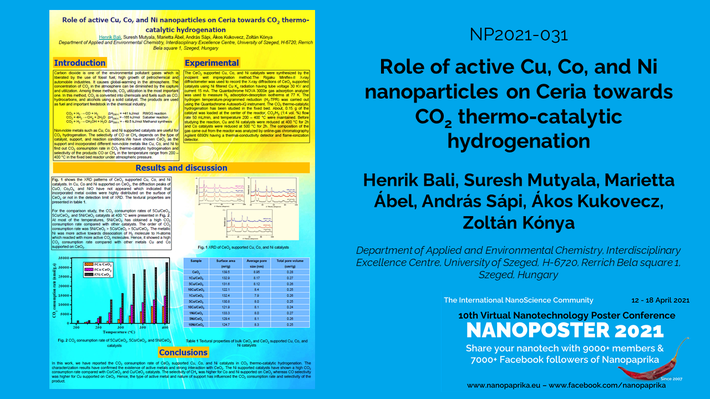