Transition metal oxides (TMO) are compounds comprising oxygen atoms bound to transition elements. These oxides exhibit phenomenal range of electrical and optical properties, which make them useful in numerous applications such as sensors, solar cells, laser hosts, anti-cancer agents, etc. Moreover, the development of nano-sized structures of TMO’s has further widened their applications in each field. The work outlined here focuses on the growth of vanadium pentoxide (V2O5) nano-rods on thin glass substrates via two different processes: conventional annealing and microwave sintering. The thin films grown have been characterized for optical and morphological properties.
V2O5 thin films of various thicknesses (5 nm-260 nm) were grown using thermal evaporation technique keeping the deposition rate between 2-4 Å/s. The deposited films were annealed in a furnace at different temperatures (200-600 °C) and for different time durations (2 hrs – 5 hrs). For microwave sintering, the samples were annealed at different temperatures and durations.
The as-deposited films of V2O5 show granular structure, and are amorphous in nature. The annealed films showed crystalline structure as determined by the XRD pattern. Uniform nano-rods were obtained at temperatures above 500 °C and 5 hours. The AFM images of unannealed and annealed films also show that the annealed films have larger grain size of the particles. The absorption of V2O5 films increased with increase in thickness and with annealing of the samples. The energy band- gap ranged from 1.54-2.45 eV. The transmission spectra showed a rapid decrease in the transmission as the film thickness increased. The annealing of the films also reduced the transmission percentage.
The V2O5 films were further annealed using microwave annealing. A shorter annealing time of 20 minutes was found to be sufficient to obtain nano-structures. However, there was lack of uniformity in the nanostructures in case of microwave annealed films. Larger spear-shaped nanoparticles were formed on top of the smaller nanorods. Thus, there is substantial difference between the nanostructures grown using conventional heating and microwave annealing. The microwave annealing process needs further optimization. 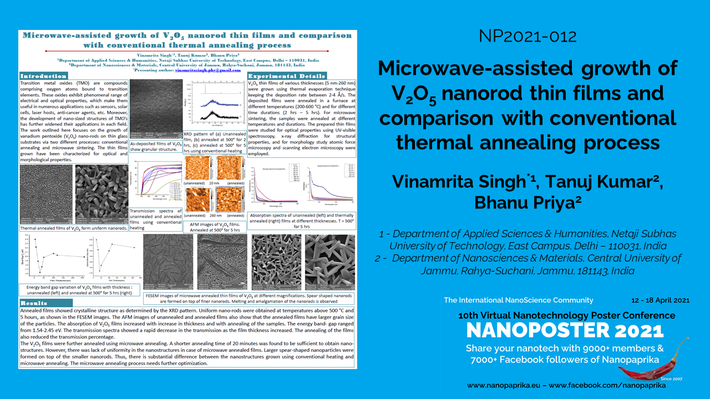